Written and Photographed by Mayra McCullough

This article concludes C2E’s Summer of Love trilogy of blogs, where we share our experiences of adventures, explorations and service involving our passion for education on the science of regenerative living. This blog is about our last portion of our travels in Ecuador.

As I continued my journey with Tim, my beloved playmate, our trip to the Amazon became an opportunity to celebrate our accomplishment of having completed a perfect retreat (Eco-Retreat: Ecuador BLOG here!).

Our intention in this portion of our trip was to explore a community in the Ecuadorian territory of the Amazon, the community of Sarayaku.

I was first introduced to Sarayaku 3 years ago while watching the preview for a documentary, The Roots Awaken. Filmed by my dear friend, colleague, and C2E Board Member, Kumiko Hayashi. She is also the founder of SOKAVision. The documentary was produced as a Community Cinema project in various Amazonian Communities. Kumiko’s intention was to create a film where the various communities in the Ecuadorian Amazon could see how they were all ONE and the same, in spite of the strife that becomes activated by oil companies using the old school divide and conquer strategy.

I never had Ecuador on my radar for future travel possibilities, however at that moment, there was nothing more I wanted than to BE THERE. Two weeks later a Puerto Rican soul sister sends me a link telling me I HAVE to check this out, it was the Eco-Lodge Sacha Ji…the rest is history. 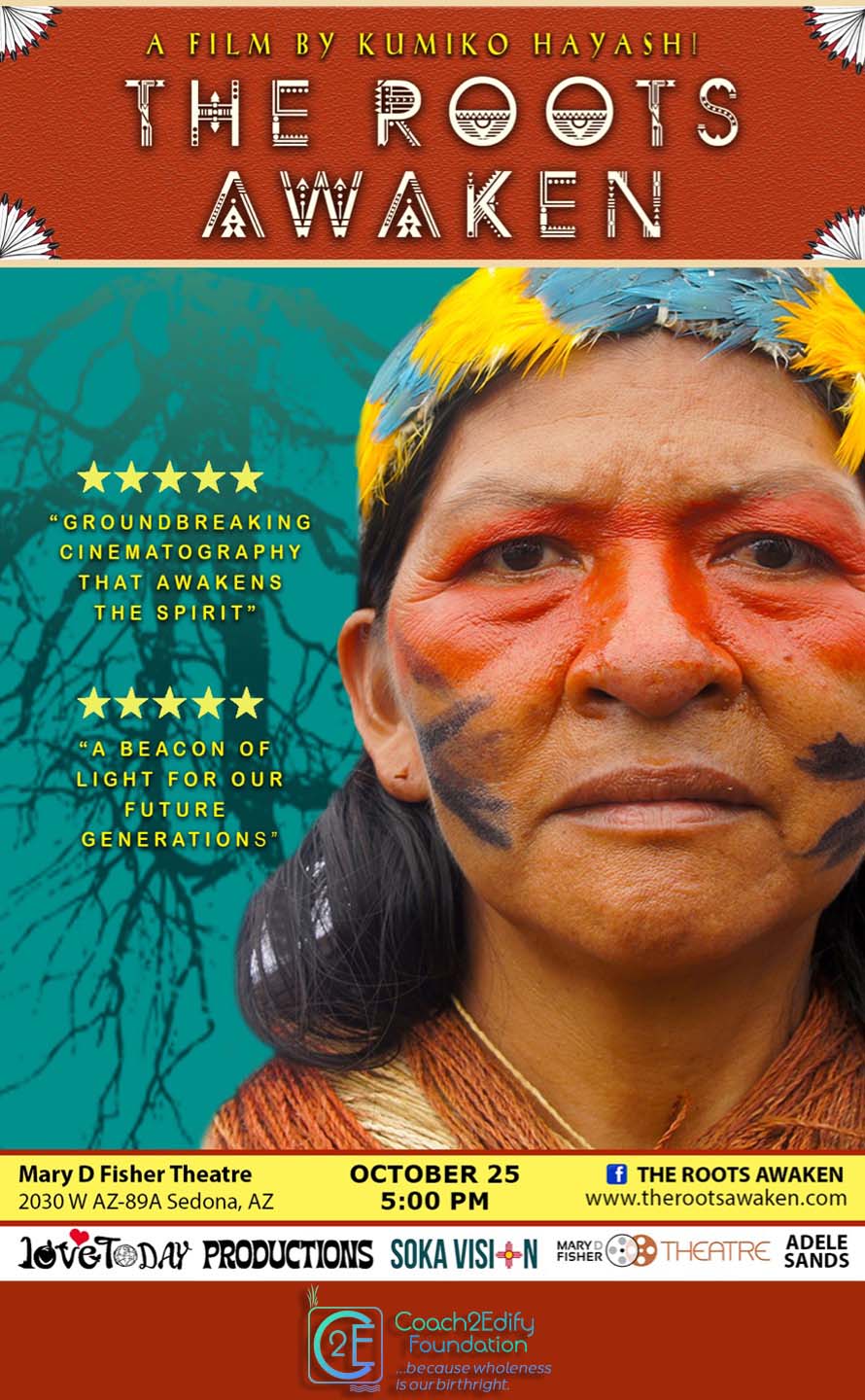 I had never even imagined going to the Amazon. The thought created a sense of intimidation, as if the Amazon is only for hard-core adventurers. I never considered myself a hard-core adventurer, but Tim is one for sure! The fact that he was going helped me feel safe and confident as well as the fact that Kumiko made the necessary connections so we could stay with her host family from when she filmed her documentary.

Our curiosity about the Kichwa people of Sarayaku, stemmed from our desire to take University students to an Eco-Retreat, where in addition to visiting Sacha Ji Eco-Lodge we would also go to create a more grassroots version of the nature connection lifestyle in order to deepen the cultural exchange experience.

We first stopped in Quito, the buzzing capital of Ecuador, for a couple of nights. Our first night in Quito was with our happy campers Julia and Buck, Eco-Retreat family who were on their way back to Los Angeles. We celebrated with a wonderful view of the fun town with a great selection of Ecuadorian food samplers.

We stayed in a lovely hostel that reminded me of Puerto Rico’s cottage industry, restaurants, and bars, as well as the Eco-Chic AirB&B my residence in Woodland Hills has become. We also visited La Ciudad Antigua (Old Town) filled with majestic Spanish architecture and cobblestones reminiscent of Old San Juan, Puerto Rico and Madrid, Spain. The ornate churches were breathtaking, reminding us of the strong Catholic influence in Ecuador.

A very long story short, we will fast forward to the town of Puyo, where finding the boat ride to get us to Sarayaku was quite the adventure. Bottom line: anyone cannot just step in a boat and go IN. But thank God we had the Sarayaku connection in Puyo with the Gualinga family, our hosts in Sarayaku, with Franco and Daniela, brother and sister who currently reside in Puyo. They were true ambassadors, made the arrangements by jumping loops left and right since Sarayaku’s Presidenta, Mirian Cisneros, just elected President a few weeks prior, was IN (Sarayaku) and not available to grant us permission. We lost a night, but the next morning, after about 3 hours of prep and travel time to get to the wooden canoe, we were on our way! Except that the motor’s cord in the canoe breaks as Marco, or captain, was pulling to start it. I thought this was it, we were not going into the Amazon. How where we going to get a mechanic to fix the motor? To my delight and surprise this people can fix anything. Within minutes there was a crew of about 3-4 working and fixing the motor, and they did!! Suddenly, I was there, a surreal moment of walking into a dream, the Amazonian jungle, with the Bobonaza river at a high water level after a lot of rain the night previous, taking the muddy melted earth look. Below is a video of this unforgettable moment.

We were received by Shinae and Don Miguel Gualinga, after a very muddy hike on flip flops filled with information on how to pack smarter next time. They received us like Super Hosts, even though they had no idea we were arriving due to some communication breakdowns and rookie moves in my part as I coordinated the plans from LA. It was a humbling experience to have them graciously cook meals for us and provide accommodations. We slept in an open room on stilts with a corrugated metal roof that was my sleep’s lullaby during the rainy nights. Don Miguel and the men of the tribe are in charge of building everything in the community. Each family had a very similar lay out of the family house on stilts with the family’s bedrooms, and a guest stilt house. When we were setting our stuff in our bedroom for the next couple of days, I had one of the most joyful encounters to date in this trip. Little baby brother, saw me from the balcony in his stilt house right across the way and began to play sword ninja with me in a spontaneous ‘take turns being a ninja’ game we played for a while. The children of Sarayaku are healthy, joyful, highly intelligent, and boy super strong! We ended up playing animal flow and he could do ALL the moves. 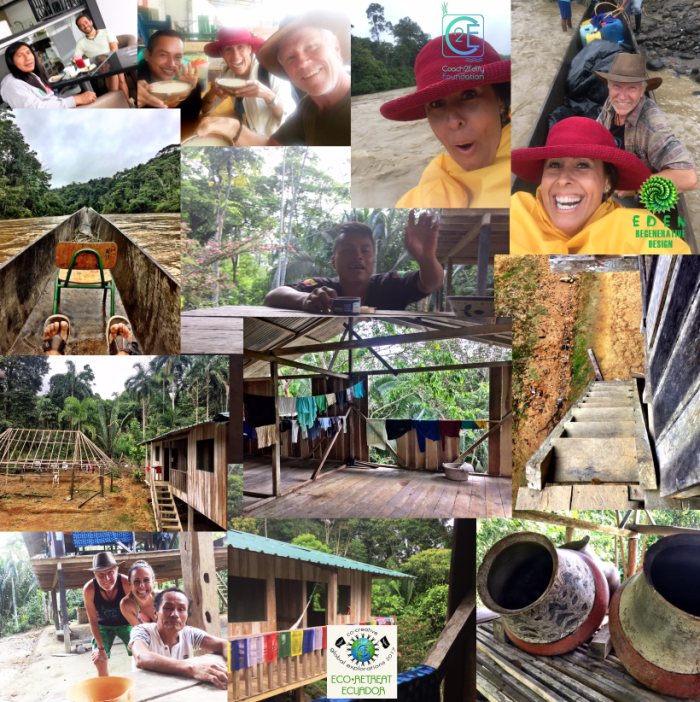 The next day Shinae Gualinga, a true diplomat of her people, took us on a tour of their village and took us to a chicha (their spirit of choice) party with her girlfriends. The village was clean and organized. Each building in the village had a government assigned role, such as the library, congress, assembly, presidenta’s house, and cultural center. They also had a clinic funded by the Ecuadorian government. Shinae introduced us to the village doctor who sat with us for a while and was very open about their victories, challenges and concerns. We also enjoyed seeing the expansive school buildings with lots of happy children playing, in class, and so curious about us. 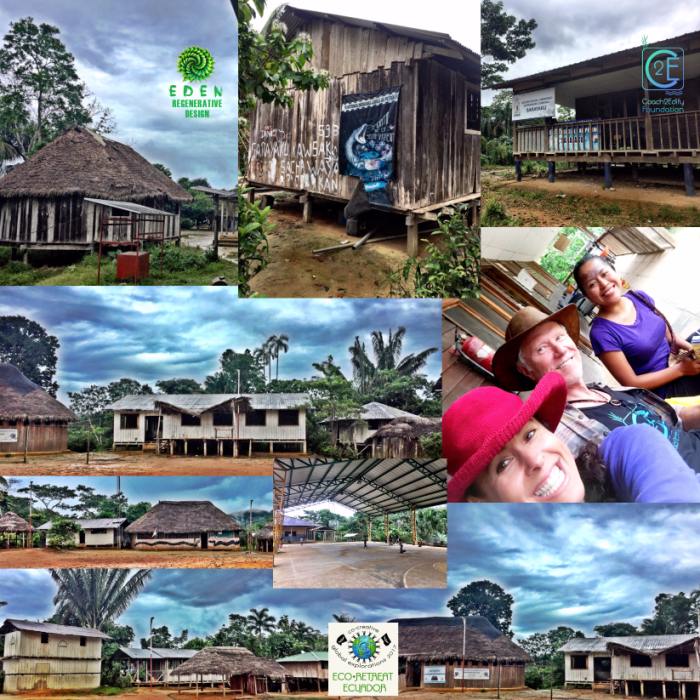 The bridges, rivers, and all the steep climbs that led us to the chicha party were breathtaking and thankfully very doable too (although still tough).

I wanted to take in everything with every ounce of my being. Having chicha with the local women was a blast. We sat for hours sipping from the bowls of the fermented drink. Thank God Tim and I are beasts and took the spirits like pros! Shinae was certainly impressed with our endurance and kept sharing stories of visitors who didn’t make it out of the chicha party with a sober mind able to walk back. Uff!

We were even able to head back and have a great talk with Sarayaku’s Presidenta Miriam Cisneros, who welcomed us, and even invited us to a health forum the following day, which we couldn’t attend due to our very tight traveling schedule, but we did talk about coming back with a group for a cultural exchange program, and she was very open and willing to collaborate! YES!!!! Mission accomplished!

Our two night stay was way too short but, even though we lost a day due to canoe arrangements, we were glad we went in and made contact, established trust, and planted seeds of collaboration. Our hosts continued to be sweethearts through to the end, and made sure we got back on time to catch our plane back in Quito. Don Miguel caught some catfish on the last day and prepared a soup that was out of this world. The boat ride back went smoothly after another mechanical rescue mission, confirming the indigenous people’s high intelligence, which explains why the people of Sarayaku won a lawsuit that they themselves organized against the Ecuadoriam government who sold the mineral rights to their land to Chinese oil companies without their permission. This became a historical event in 2012. (For more on that story: http://amazonwatch.org/work/sarayaku) 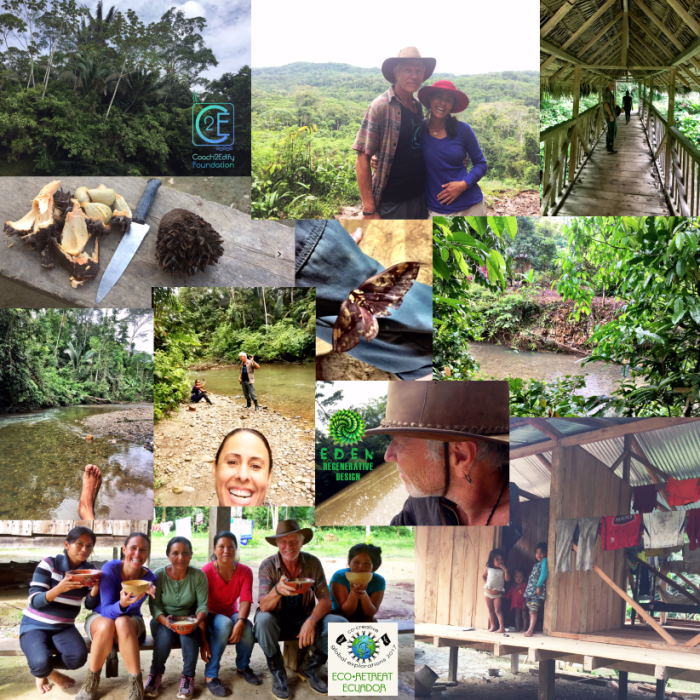 On our way back to Quito we stopped at the lovely ecological adventure city of Baños de Agua Santa, with it’s beautiful colonial buildings in contrast to the 3 stories bars/discos filled with the party ambience of Old San Juan meets Madrid. Only difference here was that the town goes to sleep by midnight, which was a good thing! Baños is filled with young travelers from all over the world seeking ecological adventures such as river rafting, rock climbing, mountain biking, cave exploring, hot springs and active volcano trails.

Our research and development portion of this Global Exploration came to a completion in Quito’s airport neighborhood Tababela, which didn’t stop to amaze us with it’s charm, mini farms all titled after family members and heart of service. Our last epic moment in Ecuador was when a gentleman in his 70′s greeted me with a huge smile and hello, asking me what did I harvest today. We had traced the path of another future Global Exploration.

We all had a loving and rich experience, claiming to come back again for sure!